In the early morning of Friday 26. November 1943 440 heavy bombers of the 8. Airforce took off from the American airbases in Eastern England. The crews were briefed for a raid (raid no. 169) on a very important target, which was already attacked on November 3., 1943, the city of Bremen, the second harbour in Nazi-Germany with about 430,000 inhibitants and his navy dockyards along the river Weser, where the Germans built and repaired there U-boats, who were responsable for the huge loss of alliedf ships on the Atlantic.

At the end of raid 169 25 of the bombers did not return to their bases in England.

Bremen was, however the most important, not the only target of this raid. About 15 minutes before the bombers with target Bremen,  consisting of 9 combat wings, would leave the English coast, two other combat wings heavy bombers must cross the Channel to attack targets in the Paris area (France). The flightplans were made that way, that the Germans would have the bombers for Paris 1 hour earlier on their radar screens than those who would attack Bremen. They used this tactic hoping that the Germans would hold back their fighters in northern France. It was necessary to remain complete radio silence, until the enemy coast was reached. Now we know that the result was not what they hoped for, because the German listening posts and the German radar already  plotted the planes when they took off in England.

On the time the Bremen bombers reached the target area and the Paris bombers returned to the English coast, there would be an attack with B-26 Mauraders in two phases against airfields in the area Amiens- Cambrai in France. The route of the attack crossed the North Sea north from the Westfrisian Islands. On their way back they would fly over the
northern part of the Netherlands.
When the different groups were formed to combat formations, the huge force coursed eastward. Soon the force left the English coast and they saw the gray and rainy North Sea.

The weather was far from ideal, there was a low cloudcover over the Netherlands and northern Germany with cumulus clouds up to 26,000 feet. They hoped the German fighters couldn’t take off in this weather, but they were wrong. In the planes the crew was preparing themselves for their jobs. Navigators studying there maps, flight engineers controlling the planes and the gunners were watching the air and sea.
The German defence, who already spotted the planes at take off was standing by. In spite of this, only a small number of German fighters, which were available in northwestern Germany, were in the air, probably because of the weather conditions.

Three combat wings of the first division flew, as planned, over the Westfrisian Islands. The second and third division and also two combat wings of the first division flew a northern route and later on east of the planned course. They passed the German coast at Nordholz to attack Bremen from the north. Above the target area these formations where about 30 minutes back on their schedule. The three combat wings of the first division, who followed the brieved course, were shortly after passing the German coast attacked by one- and two engined fighters. The two-engined fighters firing rockets in a range of 600 yards protected by the one-engined fighters. The P-38 escorting fighters were thinned out at the time so they were not able to carry out their mission.
After the lead ship started the bombrun, Messerschmitt and Focke Wulf fighters dove on the huge American bombers to break their formations just when they were vulnerable.

One of the planes, which was indirectly a victim of the heavy flak above Bremen, was a B-17 F, without a nickname, serial 42-3531, belonging to the 365. Bomb squadron, 305. Bomb group. It took off from the airfield Chelveston, east of Northampton, England. This plane was manned by

Just after starting the raid the plane, carrying eight 500 lbs bombs and 20 M-47, was hit by flak in both outside engines and in the cockpit.
T./Sgt. Raymond W. Poirier was hit in one of his legs. Lt. Elliot ordered S./Sgt. Edward H. Matte to help Poirier. Poirier answered that he was not hurt very badly, However he felt blood running against his leg. In spite of the damage, the plane could stay in formation, so Lt. Staub could
drop his bombs on the target as planned. Shortly after dropping the bombs the plane fell back and became a straggler out of the defence of the formation.
They were noticed by a few ME-109’s between Bremen and Groningen. The fighters attacked from position 9 o’clock. S./Sgt.  The gun of James C. Stiles  failed and he informed S./Sgt. Edward H. Matte about the enemies. Ball turret gunner S./Sgt. Kenneth F. Mahood from Pennsylvania was working very hard, afterwards showed out he has used all his ammo.
Then the enemy fighters attacked from position 6 o’clock and S/Sgt. Lawrence M. Wise, the tail gunner from Texas had his rough time on 7,000 meters height. The plane couldn’t stand those attacks and was damaged all over.
T/Sgt. Mandell was hit in his right leg by a 20 mm. granate. Also Sgt. Wise and Lt. Pitts were wounded. Wise in his left hand and Pitts in his right leg. Afterwards they said there was a fire in the cockpit.
The plane reached the Dutch border and was loosing height. It was flying at about 6,000 meters. Lt. Elliot saw from his place in the cockpit the  wounded T/Sgt. Mandell. This sight must have upset him and he decided to help him bailing out, so he could be in hospital very soon. Elliot also  left the plane.
Meanwhile Lt. Pitts tried, sitting in the cockpit, to fly the plane at his own. When it showed out that Elliot wouldn’t return he switched to automatic pilot and bailed out. Lt. Pitts rang the bail-out alarm bell before he jumped. The plane was at about 17,000 feet at that time.
Lt. Hunger and Lt. Staub saw him jumping and concluded the plane was given up and bailed out too at about 13,000 feet.
In the back of the plane there were still some men who had no idea what was happening. It is possible that the intercom broke down, so they didn’t hear the bail out order. Sgt. Matte, the right waste gunner noticed that the plane slightly was going down, but he thought this was a planned action by the pilot. On a certain moment they concluded that something was wrong and they had to leave the plane. Sgt. Matte assisted Sgt. Wise by bailing out and after him Sgt. Mahood, Sgt. Stiles and Sgt. Matte jumped off at a height of about 1,000 meters.
After Sgt. Matte landed, a farmer came to him and asked if he he was American or Canadian. He answered he was American. The farmer asked him to follow. Matte thought the farmer was member of the resistance and walked with him to his house. Matte remembers a beautiful blond girl, about 4 years old. He opened his survival kit and gave her some chewing gum. Shortly after he entered the house, a huge man, speaking english very well, arrived. He told he was Colonel in the Dutch army and he was grounded by the German authorities. Very soon two German soldiers arrived. An older sergeant assisted by a very young soldier. The sergeant left soon and Matte was guarded by the young soldier, who was
very friendly. The soldier asked the farmer for a map of the USA. The soldier searched on the map and pointed on a city in Michigan. The soldier had an uncle living in that city.

The sergeant returned with a little car. The parachute of Matte in the back. He envited Matte to sit down in the back and drove away. After about half an hour they arrived at a military site, obviously an anti-aircraftgun. It was almost dark so Matte couldn’t observe the site from his position. After a meal he went to sleep. He must slept for almost an hour, when twelve German soldiers entered, surrounding him. The  officer in duty made a sign with his finger over his throat and Matte concluded they’ll kill him when he tried to escape. Later another car arrived. When Matte looked outside, he saw a truck and as a surprise he saw the other crew members except Mandell and Mahood, who arrived earlier. After a while they took Matte and his friends outside. They had to step into the truck and they were driven to the Roman Catholic Hospital in Groningen. Wise and Pitts had to stay there. The other men were transported to the navy prison in Groningen, where they spent the night of 26/27 November. The next day they travelled by train the whole day and spent the night in a German city.

At about 1300 hours the fortress, which was given up by it’s crew crashed in Zuidbroek. While coming down it passed the villages of Veendam and Muntendam.

Harry Venema, 13 years old at that time said: On that day I was, before I went to school, playing outside. At about 1300 hours I heard the sound of a plane, a flying fortress, on a height of about 200 meters, damaged as I could see and the speed was too low. Suddenly I saw another plane, a German fighter, that flew around the bomber. But there was no shooting. Also I saw about five parachutes in the air. Meanwhile the plane turned to a northern course and I could follow it till it passed Muntendam. Later on I saw a huge cloud of smoke.
In Zuidbroek the local baker E. Meijer, was frightened to death when he saw the crashing plane right in front of him. The plane hit the ground after crossing the Winschoterdiep, a canal, and destroyed the houses of the Nijhof and the Op de Dijk family. It just missed the school by meters. The houses were completely damaged and the burning wreck laid on the land owned by farmer J.J. Krans. The oldest daughter of the Op de Dijk family and Mr. Nijhof were lightly hurt. The daughter of Nijhof laid behind their house uncounsious. She was taken to a hospital and recovered.

Soon German soldiers and police came to secure the area. Later they found the burned body of T./Sgt. Raymond W. Poirier, who was first buried November 29.,1943 in Zuidboek. After the war on February 14., 1949 his body is reburied on the Netherlands American Cemetery in Margraten. (plotno.7 row 10 grave 14).

The men who survived the crash were caught by the Germans. T./Sgt. Mandell who was seriously enjured was taken to a hospital in Groningen
where he died November 29., 1943. They others were transported to the navy prison in the city of Groningen, where they spent the night of 26/27 November. The next day they were transported to prisoner camps.
Elliott, Pitts, Hunger and Staub were interned in Stalag Luft 1 in Barth,

Germany in barracks 2, room 4 of the south compound of this camp.
The other three men, Stiles, Matte and Mahood, were interned in Stalag 17B in Braunau-Gneikendorf near Krems, Austria.
Where Wise was taken to prison is not known. 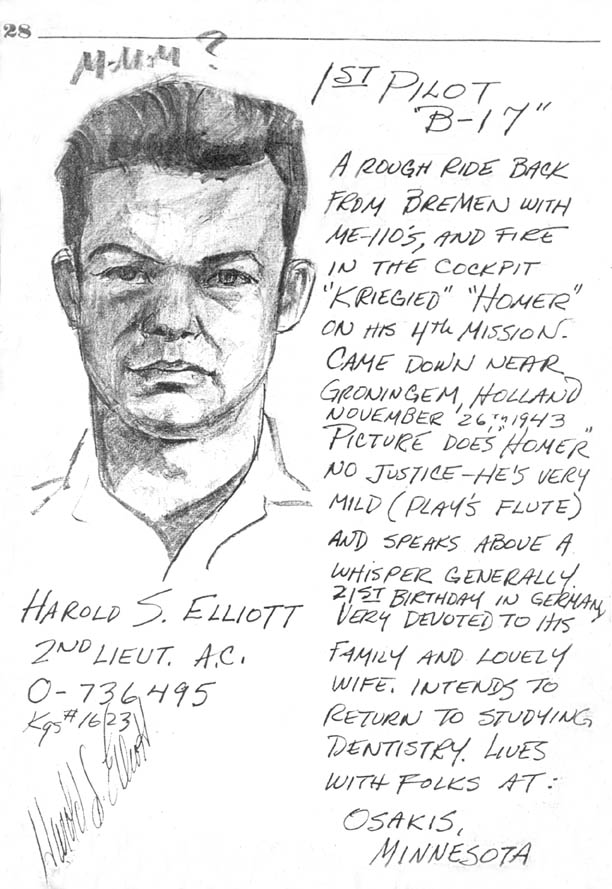 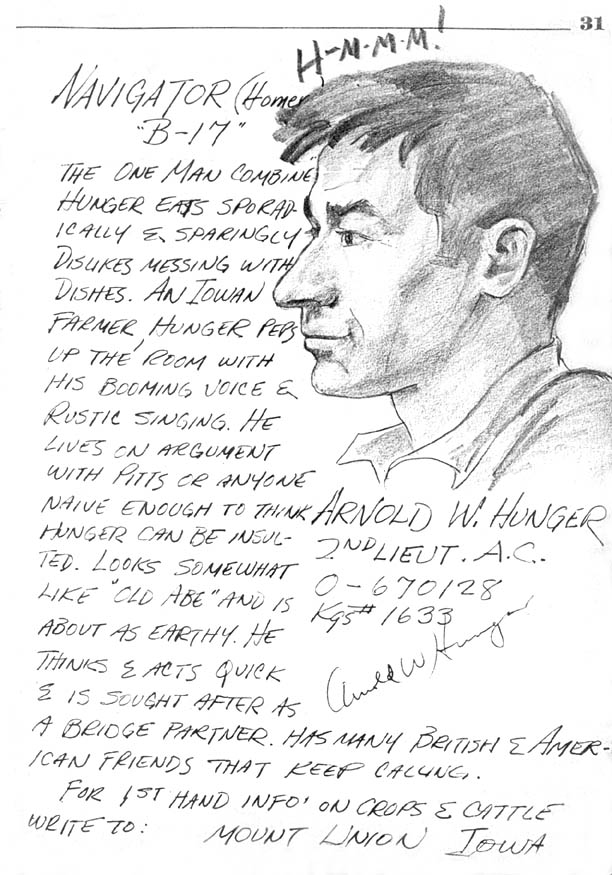 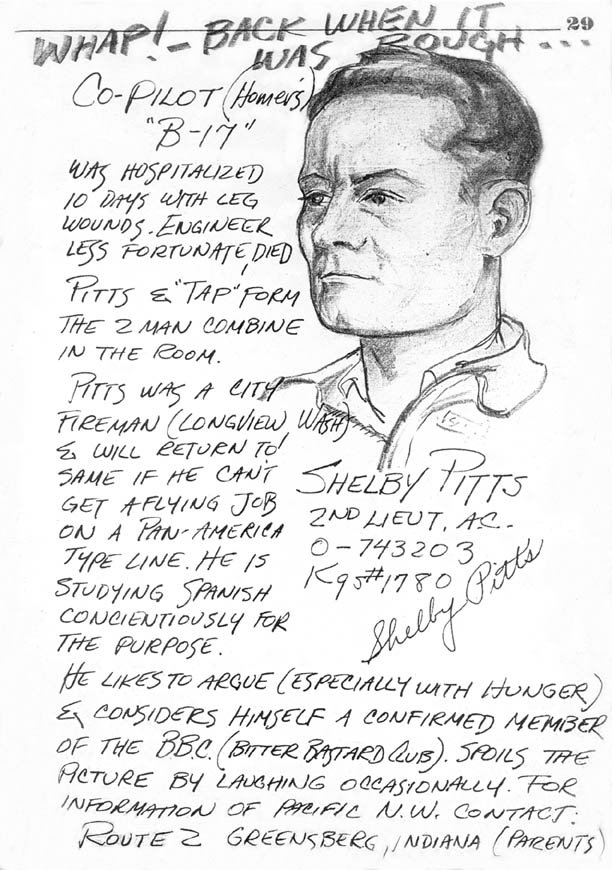 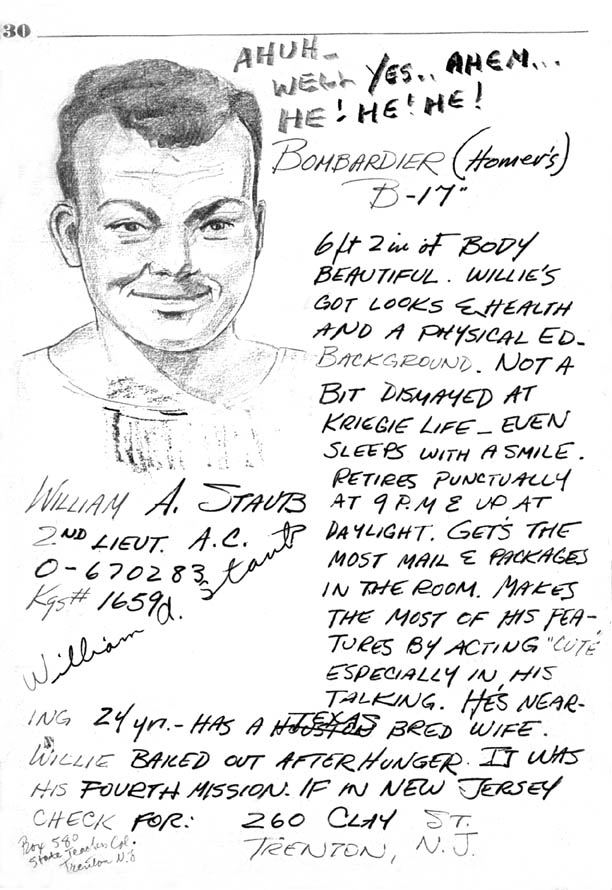 These sketches were made by 2./Lt. Paul Canin, also a prisoner in Stalag Luft 1

The Boeing B-17 “Flying
Fortress”

The “Flying Fortress” is one of the most famous airplanes in World War II. The prototype first flew in 1935. From late 1941 it was on service. The plane served in almost every battlezone of World War II, but is best known for the strategic daylight bombing of German industrial targets.
During the production the plane was modified several times. The plane got the name “Flying fortress” for his strong armour and his heavy arms (13 machine guns calibre 0.50). His topspeed was 480 Km/h. It was capable even heavely damaged to return to the homebase. The production of this plane ended 1945 after a total of 12,726 built planes.

Additional information about the crewmembers

Sources to this story:

Home of the Bosscher familyname